Universal Health Care Could Have Saved More Than 330,000 U.S. Lives during COVID

Universal Health Care Could Have Saved More Than 330,000 U.S. Lives during COVID

The numbers of lives lost and dollars spent would have been significantly lower if coverage had been extended to everyone, a new study says 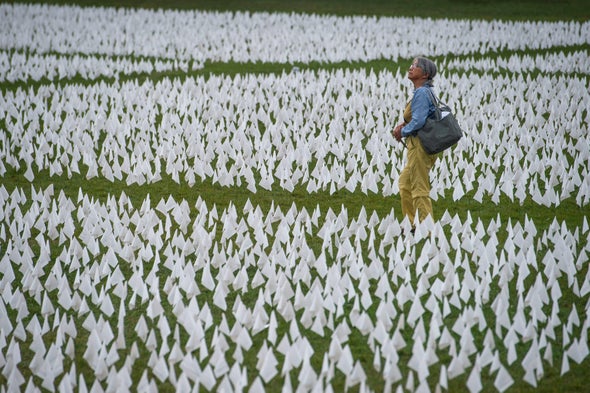 A woman walks among a field of some 660,000 white flags representing the number of U.S. lives lost to COVID-19 at the National Mall in Washington, D.C., on September 16, 2021. Credit: Rod Lamkey/CNP/Sipa USA/Alamy Stock Photo

Americans spend more on health care than people in any other nation. Yet in any given year, the piecemeal nature of the American medical insurance system causes many preventable deaths and unnecessary costs. Not surprisingly, COVID-19 only exacerbated this already dire public health issue, as evidenced by the U.S.’s elevated mortality, compared with that of other high-income countries.
A new study quantifies the severity of the impact of the pandemic on Americans who did not have access to health insurance. According to findings published on Monday in Proceedings of the National Academy of Sciences USA, from the pandemic’s beginning until mid-March 2022, universal health care could have saved more than 338,000 lives from COVID-19 alone. The U.S. also could have saved $105.6 billion in health care costs associated with hospitalizations from the disease—on top of the estimated $438 billion that could be saved in a nonpandemic year.

“Health care reform is long overdue in the U.S.,” says the study’s lead author Alison Galvani, director of the Center for Infectious Disease Modeling and Analysis at the Yale School of Public Health. “Americans are needlessly losing lives and money.”

People who do not have insurance usually do not have a primary care doctor, which means they are more likely to suffer from preventable diseases such as type 2 diabetes. They also tend to wait longer to see a doctor when they fall ill. These two factors already contribute to higher mortality rates in nonpandemic years, and they compounded the impacts of COVID-19. Comorbidities exacerbate the risk of the disease, and waiting to seek care increases the likelihood of transmission to other people.

Prior to the pandemic, 28 million American adults were uninsured, and nine million more lost their insurance as a result of unemployment because of COVID-19. “Many Americans feel secure in having good health insurance from their employer, but employer-based insurance can be cut off when it is needed most,” Galvani points out.

In the new study, Galvani’s team compared the mortality risks of COVID-19 among people with and without insurance, as well as their risks of all other causes of death. The researchers compiled population characteristics of all uninsured Americans during the pandemic, taking into account things such as age-specific life expectancy and the elevation in mortality associated with a lack of insurance. They calculated that 131,438 people in total could have been saved from dying of COVID in 2020 alone. And more than 200,000 additional deaths from COVID-19 could have been averted since then, bringing the total through March 12, 2022, to more than 338,000.

The researchers also estimated the cost to insure the entire American population—and the savings that measure would produce. They found that a single-payer health care system would generate savings in three ways: more efficient investment in preventative care, lowered administrative costs and increased negotiating power for pharmaceuticals, equipment and fees. This would ultimately produce a net savings of $459 billion in 2020 and $438 billion in a nonpandemic year, the authors found. “Medicare for All would be both an economic stimulus and life-saving transformation of our health care system,” Galvani says. “It will cost people far less than the status quo.”

Galvani and her colleagues’ findings are “very convincing,” and “the methodology strikes me as exactly right,” says Robert Reich, a professor of public policy at the University of California, Berkeley, who was not involved in the work. “The savings estimates are consistent with every other estimate I’ve seen.”

Ann Keller, an associate professor of health policy and management also at U.C. Berkeley, suspects, however, that the new study likely underestimates the deaths that could have been avoided through universal health care because it does not consider the lower rates of chronic disease that often accompany single-payer systems. “Having consistent access to care can prevent chronic disease from occurring and can ensure that patients who develop chronic disease have it better managed,” says Keller, who was also not involved with the research. “I would think that, if one took that into account, the estimates of avoided deaths would be greater than the numbers reported here.”

Whatever the exact figures, Galvani says the message that comes out of the new study is clear: “Universal single-payer health care is both economically responsible and morally imperative.”